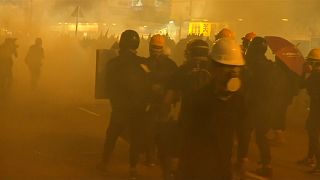 Hong Kong police fired tear gas on Saturday (August 3) in confrontations with black-clad activists in the city's Kowloon area, as the Chinese-controlled territory was again rocked by anti-government protests.

Protests against a proposed bill allowing people to be extradited to stand trial in mainland China have grown increasingly violent since June, with police accused of excessive force and failing to protect protesters from suspected gang attacks.

While the rallies have been largely peaceful, they have increasingly turned into skirmishes with police after some protesters refused to disperse at assigned times.