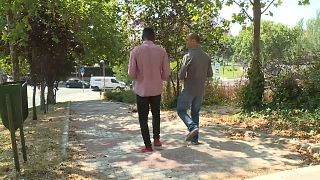 Over 13,000 unaccompanied young migrants in Spain

They are teenagers and they are alone. And they number 13,000.

They have travelled through war zones and braved treacherous seas in search of a better life in Europe. But many of the thousands of unaccompanied migrant minors now registered in the country are stuck. They are in a state of limbo as the likelihood of getting permanent accommodation remains low.

A 17-year-old from Ghana called Momo spoke to our correspondent Jaime Velazquez in Madrid: “We were sold. All of us. Everybody. I was sold for 1.700 dinars.” That happened to Momo once he arrived in Libya. He says he had to trek across the desert for two days before arriving in the war-torn country, “where human trafficking has become the most profitable business. Human lives are worth just 200 euros.”

Momo was rescued in the Mediterranean sea, taken to Italy, and then Spain. He says he is eager to learn and start working, but after two months in a Spanish holding centre, he feels the system has let him down: “It is like opening a cage and then you put animals inside and then you lock it - you don't care whether they live or die, that's how we are living. Here we are not living we are just existing.”

People in Madrid have mixed feelings about the thousands of children in the Spanish capital. Julián Moreno is a resident who thinks most of them are good kids, “most of them have a good profile. But then you have the dodgy ones too, unfortunately.”

Jesús Sobral is another Madrid resident: “This is going to create a conflict in the neighbourhood between those who support the kids and those who don’t, and that is a problem which is going to be impossible to solve.”

Carlos Chana is the Director of Children in Need Programme with the Spanish Red Cross. He notes that “most of them come with the clear intention of working, of being independent economically and able to send money to their countries and their families." Chana goes on to say: "Sadly the system cannot manage the huge volume of kids that are arriving.”