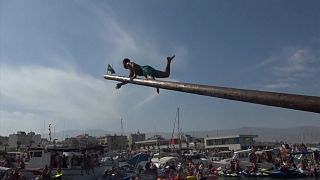 Dozens of plucky locals took part in a bizarre traditional competition in the port of Roquetas de Mar in southern Spain on Friday afternoon which saw them attempt to run the length of a greasy pole to grab flags before splashing into the sea below.

There were prizes on offer of 400 euros to anyone who could snatch the Spanish flag and 200 for the green-and-white standard of Andalusia but organisers didn't have to pay out this year as none of the competitors made it to the end of the 6-metre long pole.

A few got agonisingly close but then lost their footing and tumbled into the waters of the Mediterranean under the gaze of hundreds of enthralled spectators.

The 100 per cent failure rate was put down to the fact that organisers decided this year to make the pole longer to increase the difficulty.

"Curana" event as it's known in Spain, takes place every year as part of the Santa Ana festival.