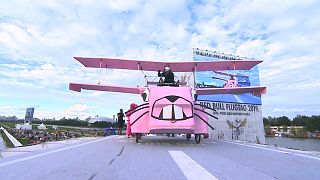 Participants of Red Bull Flugtag competition took their chances on Sunday, July 28th to entertain themselves and the spectators gathered at a Moscow canal with colourful costumes and quirky attempts to make their machines fly.

38 teams from across Russia pushed their home-made human-powered vehicles from a pier into water making viewers gasp, sigh, laugh and smile.

According to the Flugtag rules, the machine should be no longer than 10 metres and weigh under approximately 150 kilograms.

Flugtag means "flight day" in German, but all of these crafts ultimately splash into the waters below.

Teams built their flying machines with three criteria in mind: how far it will fly, the creativity and artistry behind the design.

The contest started in Vienna in 1991 and now plays out annually in more than 100 locations.