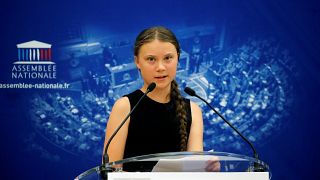 "They said that we children, we exaggerate, that we are alarmists. To respond to that I invite you to read the last IPCC report. You will find all of our 'opinions' there." Those were the first words of 16-year-old Swedish environmentalist Greta Thunberg to the French parliament on Tuesday after some Conservative MPs called her an "apocalyptic guru" and a "prophetess in shorts".

The rest of Thunberg's speech urged French MPs to reach the latest IPCC report if they wish to limit the damages done by global warming.

"All we children did is to communicate those scientific facts," she said.

Thunberg pointed the finger at companies and politicians for ignoring the climate change problem.

"The biggest danger is not being inactive, it's when politicians and companies pretend to be doing something."

"Apocalyptic guru" and "prophetess in shorts"

On Saturday, Guillaume Larrivé, presidential candidate of Les Républicains, called on his colleagues to "boycott" Thunberg’s speech at the National Assembly.

Republican Julien Aubert also announced that he would not show up to “applaud the prophetess in shorts”.

He called Thunberg “the winner of the Nobel fear prize”.

In a video interview with French news website Konbini news, Thunberg replied to the criticism by saying "they are more scared of me and by the youth climate protests than by the real problem".

The President of Génération Ecologie, Delphine Batho, has criticised the attitude of the deputies who are opposed to the arrival of Thunberg.

“We must believe that we are in a dramatic situation and even tragic that youths are reading the reports…more than many politicians.”

“The anger should be affecting everyone. It’s not a boycott we need, on the contrary, we should cheer and say we do not do enough.

“This young woman has had an extraordinary role in global awareness in Europe, even in the world.”

On Friday, the 16-year-old won the praise of German Chancellor Angela Merkel, and on Sunday she received a €25,000 prize presented by World War II veterans in northern France.

The teenager is now one of the leading faces in the fight against global warming. She has a clear message that those at the top need to do more to curb fossil fuel emissions and take climate action.