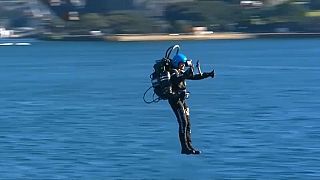 On the 50th anniversary of astronaut Neil Armstrong walking on the moon, an Australian entrepreneur blasted around the Sydney Opera House in a jetpack on Sunday (July 21).

David Mayman, the Chief Executive Office of JetPack Aviation performed spins and flew backwards around Sydney Harbour to the delight of his family and onlookers.

Mayman attempted a similar flight in 2010 but splashed down into the harbour unsuccessfully.

The current version, the JP10, can fly over 250 kilometres per hour and up to 5000 metres, according to Mayman.

Mayman previously flew the JP9 around the Statue of Liberty in New York in 2015.