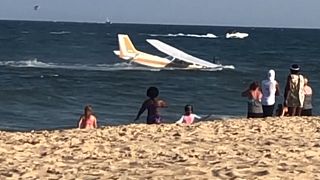 Police in Maryland said the pilot of a small plane told them he was experiencing engine trouble before he made an emergency landing in the shallow ocean waters off a Maryland beach.

News outlets quoted Ocean City police as saying in a news release that 23-year-old Trevor H Deihl took off in his Cessna plane from Reedville, Virginia, on Tuesday for a flight to Ocean City Airport.

Police said Deihl told them he was about 1.6km from shore when he began experiencing engine trouble and glided towards the shallow water for an emergency landing.

Authorities said one person on board the aircraft was evaluated by paramedics but later released.

Police will investigate the incident.