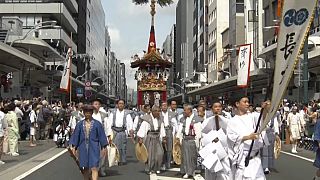 Ornate floats parade through the streets of Kyoto at Gion Festival

Ornately-decorated floats paraded through Japan's ancient capital Kyoto on Wednesday at the climax of the annual Gion Festival.

The grand procession began in the morning when a child in traditional costume on the lead float used a sword to cut a sacred rope that was stretched across one of the city's main streets.

A total of 23 floats made their way through the city, accompanied by traditional music.

Spectators cheered as the heavy floats negotiated right-angle turns at intersections, with wet bamboo sticks laid beneath their wheels.

Police said around 120,000 people lined the streets to watch the parade.