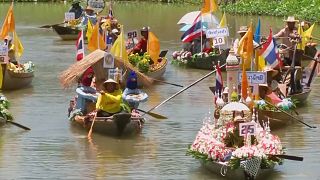 Villagers set sail in 150 boats down the Ladchado canal on Tuesday (July 16) in central Thailand as part of a traditional river procession to mark the beginning of the three-month-long Buddhist Lent.

The boats, colourfully decorated and carrying large ornate candles, sailed down the 30 kilometre-long waterway through districts in Ayutthaya, as residents and tourists gathered by the bank in an event considered a local tourism highlight.

Parts of Thailand are facing the threat of drought this year, with water reserve in dams in the northeast at less than 30% of their storage capacity. But organisers said the low-lying Ladchado will not be affected.