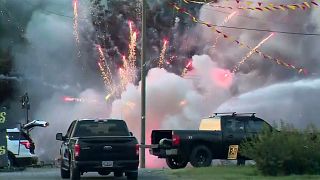 Red Bull 'Flugtag' and a 'poo museum': No Comment off the Week

Here are our picks of the best No Comment videos from this week.

A blaze broke out at a fireworks store in Fort Mill, South Carolina, on Thursday, igniting its inventory and setting off a dramatic display.

There was no immediate word on what started the fire or if anyone was injured, according to local media.

While over in France, the mercury climbed as spectators in Lyon's Confluence area were treated to a show at the Red Bull Jour d'Envol or 'Flugtag'.

Intrepid pilots jumped into the water from the 6m-high platform on gliders decorated to resemble all manner of wacky inventions.

Their goal: to fly as far as possible in an effort to break the record of 78.64m held by an American team since 2013.

A competition that was less adrenaline-fuelled in nature took place in Murmansk in the Russian Arctic on Saturday: office chair racing.

Eight teams of three raced the 40m course on chairs brought from their own offices.

Venice's Piazza San Marco was lit up on Wednesday night to celebrate the release of the latest Spider-Man movie.

The event was a tribute to "Spider-Man: Far From Home," which features several scenes shot in the iconic Italian city.

There are a lot of strange museums out there, but how would you feel about a poo museum?

Japan's newest attraction is a museum dedicated to exactly that — it opened in March this year and has already been flushed with success.

The museum's producer Masaru Kobayashi said that the theme was chosen because of poo's impact and popularity in Japanese pop culture.

At least eight people were killed and six others were missing in South Korea as heavy rainfall drenched the greater Seoul region, turning the affluent streets of Gangnam into a river of submerged vehicles and overwhelming public transport systems.