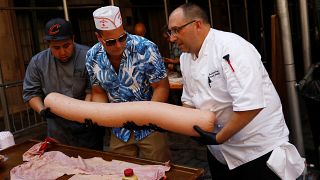 A massive hot dog weighing in at 66 pounds (29.9 kilograms) attempted to set a Guinness World Record for the 'Largest Hot Dog'.

It took three men to carry the pink, five foot (1.5 meters) long, 100% beef hot dog to a grill where it cooked for two hours before it was placed on an equally large bun and weighed.

Topped with mustard and sauerkraut, the large hot dog was served to the public.

At the moment, there is no Guinness World Record for 'largest hot dog'.

This event marked also the 52nd anniversary of this culinary tradition as on June 26, 1867, Charles Feltman introduced the first hot dog to the world.