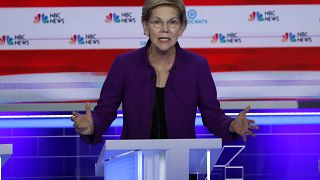 Senator Elizabeth Warren was the standout candidate in the first TV debate of the Democrats’ Presidential election campaign, according to many observers.

Thomas Gift, Lecturer in Political Science at the University College of London, told Good Morning Europe that her attention to detail marked her out from her competitors, in the debate held in Miami.

“One of the things she really had to do was show command of the issues, show that she was serious about policy, because so much of her campaign platform has been based on very specific policy proposals,” he said. “And I think for the most part she did this. She positioned herself well going into future debates.”

25 candidates are standing for the Democrats’ nomination and a further 10 will be heard in a second debate on Thursday night.

“I think the candidates to look at tonight are Bernie Sanders and Joe Biden”, says Gift. “They are the ones with the biggest name recognition. I think where the opportunity lies is for some of the lesser known candidates - they really have to break out, because going forward it becomes more difficult for them to participate in the debates because the Democratic National Committee ups the threshold in terms of poll numbers that they need or donations that they need.”

Watch the interview in the video player above