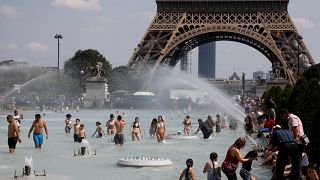 Poland has been experiencing high temperatures since the beginning of June — it could even be the hottest June in the country for 200 years.

Summer has also finally arrived in eastern Iceland, with a record of 22°C on the thermometer, with some people even saying they were grateful when the clouds blocked the sun.

On what is the hottest day of the year so far Frankfurt — the city home to the European Central Bank — residents were seeking shade and refreshment wherever it could be found.

People living in Spain's capital Madrid filled parks to enjoy the sunshine, but are bracing themselves for temperatures which are likely to rise to over 40°C in the coming days.