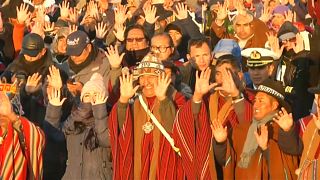 Bolivian indigenous community the Aymara have marked their New Year by raising their hands towards the first rays of the morning sun to welcome the start of 5527.

The celebrations began at dawn in cold temperatures as the community marked the ritual.

It took place amid the ruins of the ancient city of Tiwanaku, with religious monuments such as the Akapana Pyramid and the Ponce monolith creating the backdrop for the festivities.

They included dances and offerings to Mother Earth or Pachamama, so that crops and the earth will bear fruit in the new year.

The Aymara believe 'father sun', or"Al Tata Inti," gives his warmth to Earth on the New Year, heralding the onset of spring.

In pre-Hispanic America, native people depended much on agriculture, and many of their rites are aimed at obtaining the blessing of the gods to ensure an abundant crop.

Quechuas and Aymaras hold two festivals annually for sowing and harvesting, which coincide with the summer and winter solstices.