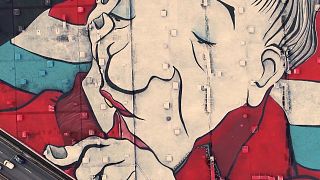 The biggest fresco of street art in Europe

This is Europe's largest mural of street art — but you can't see it from the ground.

The size of four football pitches, the fresco is located in the Parc des Expositions, south-west Paris, and has the French capital's ring road running through it.

It depicts an elderly woman looking pensive and leaning on the six-lane road. It took ten days to complete and several hundred litres of paint, which were mostly hand-sprayed.

The artwork, by the French duo Ella & Pitr, can only be seen from a nearby rooftop or via a drone.

It was commissioned by the collective Art En Ville, after the company managing the site, Viparis, approached them as part of a modernisation project.