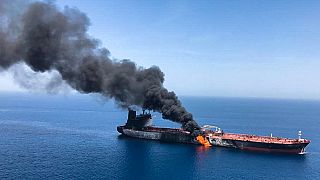 Iranian miscalculations over western “red lines” could lead to a conflict that nobody wants, a Gulf affairs specialist has told Euronews.

The United States and Saudi Arabia have blamed Iran for attacks on two tankers in the Gulf of Oman last week. Mike Pompeo has said the U.S. will take “all actions necessary” to keep vital shipping routes open.

“It’s a hugely worrying situation,” says Haines-Young. “Iran is in many ways a rational actor and it does not want to see a conflict here. But what Iran does do is it operates up to what is sees as red lines, so it carries out limited attacks or limited strikes that it thinks are not going to draw a large strike from the U.S., but will send a clear message to those that are watching the incident."

“But there is obviously this risk involved which is that we have seen Iran make miscalculations, and we have the additional problem for Iran that the current administration isn’t necessarily that easy to predict.”