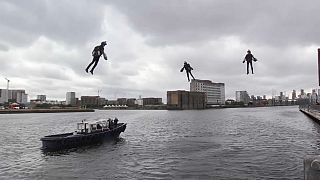 This is the moment new jet suits were demonstrated at a special unveiling in London.

They are made up of five mini-jet engines, two on each arm and one at the back. In total the engines generate around a 1000 horsepower, that is more horsepower than is generated by a sports car like a Ferrari.

According to the developers, Gravity Industries, it can reach speeds of up to 55 miles per hour (88 kilometres per hour).

The fuel used to power the suit is the same as that used by civil aeroplanes, but it can also run off diesel.