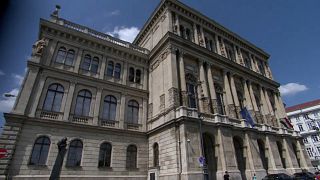 The president of Hungary's Academy of Sciences has written an open letter to members of the Hungarian parliament in the hope of saving the freedom of sciences in the country.

The fears have arisen from an upcoming parliamentary vote on a bill that potentially threatens the independence of research.

If voted through, a new body would lead the academy with mostly political appointed members to it.

Emese Szilágyi, a scientist at Hungarian Academy of Sciences says Prime Minister Viktor Orban would have too much influence in research projects if the legislation was to come into place.

“This would be a 13-member body composed of 12 members plus a president. The Academy would suggest six members and a further six members would be appointed by the Ministry of Innovation and Technology, which operates directly under the orders of the Prime Minister.”

Thousands of people opposed to the new legislation demonstrated against it earlier this month.

László Lovász, President of the Hungarian Academy of Sciences (MTA) shared his concerns on the future of research:

“If the Ministry of Innovation and Technology can decide on which projects take priority, it's possible they could also undermine the independence of the researchers.”

Speaking at a news conference, Lovász reminded Hungarian politicians that the European Commission had made a strong statement about the protection of the freedoms in science. He added: “It is obvious to me that these domestic measures can be done in a limited capacity by a European institution... these announcements are important.”

The MTA's president believes that these changes could pose a greater threat to the independence of social science research, which is more thought to be sensitive to abuse of power.