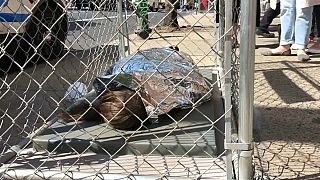 Dozens of installations popped up in New York as part of a campaign to highlight child separations at the US border.

Cages with mannequins appeared in the city amid an attempt to draw attention to the immigration crackdown at the country's border with Mexico.

At least six children have died while in US custody or shortly after being released within the past year.

It could take the US government up to two years to identify potentially thousands of additional children separated from their parents by the authorities at the southern border, the government said in an April court filing.

These installations are disappearing almost as quickly as they popped up -- with New York Police dismantling them.