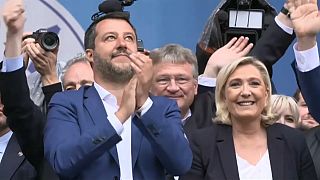 Marine Le Pen is to announce the formation of a new cross-national right-wing coalition this morning in the European Parliament.

The National Rally leader will launch the Identity and Democracy group, otherwise known as ID, as a new alliance of eurosceptic and nationalist parties from across Europe.

It will hold 73 seats in the European Parliament, and replace the Europe of Nations and Freedom group.

MEP Marco Zanni, a member of Salvini's League party, was elected as the group's chairman.

The announcement will be made at 11 a.m. CEST, and will follow the news that the parliamentary group Alliance of Liberals and Democrats for Europe Party (ALDE) will rebrand as Renew Europe.