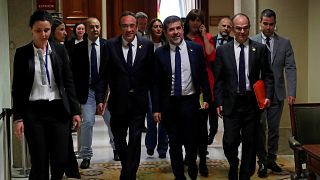 In Spain today, the trial of a group of Catalonian separatist leaders will end.

The trial started in February, but the road into the court system for the activists started long before then.

They're facing charges of rebellion, disobedience and misuse of public funds, all related to the independence referendum held on October first, 2017. The referendum was declared illegal by the Spanish government, which moved to punish those involved immediately.

By October 30th, 2017, the President of the newly declared Catalonian republic, Carlos Puigdemont, and his entire cabinet were charged with sedition.

Within days, eight ministers who had remained in the country were detained without bail - others were swept up by the justice system later that year. After being detained for more than a year, six of the jailed activists began a hunger strike in December of 2018 - it ended 20 days later.

And by February of this year, the case against them opened in Spain's Supreme Court. The trial has heard over 300 witnesses, and rejected at least 50.

The verdict is not expected until at least after the summer.