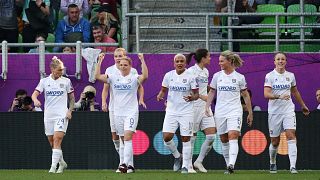 The heart of women's football: Why Lyon is the perfect city to host the World Cup

Tomorrow, a host of the world's elite footballers will be descending on Paris — it's kickoff day for the FIFA Women's World Cup. It's expected to be one of the most contested titles in the history of the tournament as the women's game grows globally and teams from all over the world step up to compete.

The grand finale will be held in Lyon, both the finals and the semi-finals to be set in Groupama Stadium. And it's no wonder, as Groupama has been the setting for some of the most brilliant moments in football history — moments when not a single man was on the pitch.

It's home to Olympique Lyonnais' women's team, which has stormed to victory for an historic four consecutive years in the Champions League.

It's also the club of the first ever female Ballon D’Or winner, Ada Hegerberg. She won't be on her home pitch during the World Cup, however, as she's decided not to play in the tournament in protest over the treatment of women's football.

"Going to the city where women’s football is at the forefront was President Le Graët’s way of thanking Olympique Lyonnais and [OL CEO] Jean Michel Aulas for their investments for many years in women’s football.”

It was that investment that built the foundation for OL's wild success. The club's journey started 15 years ago, when the popular and well-funded Olympique Lyonnais organisation decided to invest in a women's side, something nearly unheard of for a professional European club.

"I realised that the division within football, between men’s and women’s was total," said Jean Michel Aulas, the CEO of Olympique Lyonnais.

"But maybe if we tried to leverage the value of female players, with the value of women's equality in mind. And if we elevated the characteristics of the women's game, for which the demand is only getting bigger, we could be carried away by a wave."

And so they have. And as the success of the side grows, so does their talent pool. Wendie Renard, captain of the OL team, explained that Lyon became known as the destination for elite female footballers.

"When you're at the top level, players want to come here," she said.

"You can see it in the men's game for example, when Barcelona FC or Real Madrid are performing like they do, they attract the best. It's the same for us, for female players."