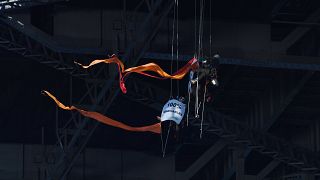 At least 13 people have been arrested by Australian police after environmental activists abseiled from Sydney's Harbour Bridge.

The Greenpeace supporters, who were calling on the country's major political parties to declare a "climate emergency," carried banners and lowered themselves from a walkway on the iconic structure on Tuesday morning.

Police, helicopter and boat crews were called to remove the dangling protesters from the bridge.

The protest was held less than a week before Australia's general election.