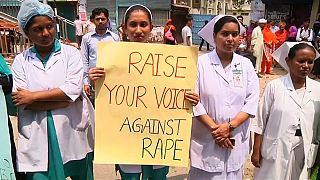 Nurses protest against rape in Bangladesh

The rape and murder of a nurse in Bangladesh just weeks after a female student was burned to death has sparked protests and renewed calls for greater protection for women in the Asian country.

Shahinoor Akhter Tania, 24, who worked as a nurse in a hospital in Dhaka, according to a medical report, was raped and pushed off a bus, while heading towards her hometown in Kishoreganj, about 100 kilometres away, on Monday (May 6).

"We are demanding the exemplary punishment of the criminals. We demand their hanging," said senior nurse Khaleda Akhtar addressing the crowds at a protest held outside of a hospital.

About 950 women were victims of rape last year, according to a study conducted by the Bangladesh Mahila Parishad, a women's rights organisation in Dhaka.

These fans might not have gotten a ticket, but they were certainly entertained ahead of the first round of 16 matches.