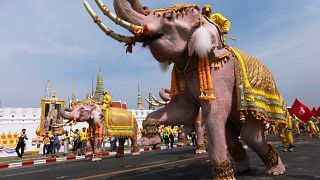 A day after thousands of Thais gathered around Bangkok's Grand Palace to celebrate the coronation of Thailand's King Maha Vajiralongkorn, another group appeared to pay respect to the new king.

Hundreds of mahouts, all dressed in yellow, and 11 white-painted elephants from different elephant camps around the country arrived at the palace Tuesday morning to perform a show of respect to the new monarch.

In Thailand, the white elephant is a sacred symbol of royal power and was used on the nation's flag until 1917.