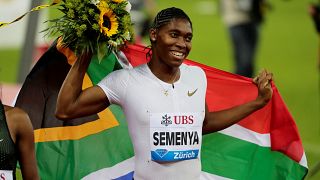 The Court of Arbitration for Sports (CAS) on Wednesday dismissed South African Olympic champion Caster Semenya's appeal to prevent the introduction of regulation limiting the level of testosterone in female athletes with differences of sex development (DSDs).

In its ruling, the CAS described the DSD regulations proposed in November 2018 by the International Association of Athletics Federations (IAAF) as "discriminatory" but said that "such discrimination is a necessary, reasonable and proportionate means of achieving the IAAF’s aim of preserving the integrity of female athletics in the Restricted Events."

Semenya is a double Olympic gold medallist and three times world champion over 800 metres. Her right to compete is under threat from the IAAF's proposed rules which would restrict the level of testosterone permitted for female runners.

The IAAF argued: "If a 'differences of sex development' athlete has testes and male levels of testosterone, they get the same increases in bone and muscle size and strength and increases in haemoglobin that a male gets when they go through puberty, which is what gives men such a performance advantage over women.

"Therefore, to preserve fair competition in the female category, it is necessary to require differences of sex development athletes to reduce their testosterone down to female levels before they compete at international level."

Under these rules, women athletes with differences of sex development would have to reduce, and maintain, their testosterone levels to 5 nanomoles per litre or fewer in order to compete.

If she wants to compete in September's World Championships in Doha, Semenya will therefore have to start taking medication to reduce her testosterone level.

In a tweet after the ruling, the Olympic champion said: "Sometimes it's better to react with no reaction."

Professor of Practical Ethics at Oxford University Julian Savulescu told Good Morning Europe that any change to the rules should not apply to athletes already competing.

“I don’t think this is the right solution, at least not in retrospect,” he said. ‘Female athletics has been full of women who have an intersex condition like androgen sensitivity syndrome, which produces high levels of testostorone. So many of the gold medallists throughout history will have a condition like Semenya. She has been raised as a women and she has competed and given her life so far. I think it’s one to change the rules prospectively, but to ruin the lives of athletes who are already in competition.”