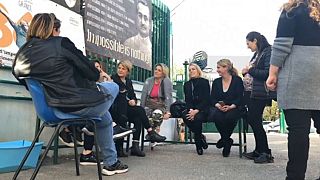 Road Trip Europe Day 25: The hard realities in the suburbs of Naples

With the EU Parliamentary elections now five weeks away, Euronews is counting down by taking a road trip across the continent to speak to voters about the issues that matter to them. We are visiting towns and villages around Europe – inviting people to talk about what's on their minds, ahead of what is a key vote at a crucial moment for the European Union.

Euronews’ correspondents Elena Cavallone and Jack Parrock are in Naples, Italy, where they met with some local people in the suburbs of the city.

They headed to the Maddaloni gym which was opened in 2005 after Gianni Maddaloni’s son Guissepe won a gold medal at the Sydney Olympics in 2000. The young people who go there to train are from one of the most troubled neighbourhoods in the whole of Italy and Maddaloni provides a free service to some: "This is social gym, very few people pay here, only those who can afford pay and where there is no father, no family behind them. This is also the meaning of sport”.

The gym is in Scampia, an area considered lawless by many Italians. It was highlighted for its crime rate in the internationally successful TV show Gomorra.

Some of the mothers of the children training there met to discuss the problems they face in their lives in such a deprived area. They call on the EU politicians to take action: “I would like these politicians to come here to see, not only relying on what other people say. But I would like them to come not only when elections are coming.”

Watch the full package in the player above