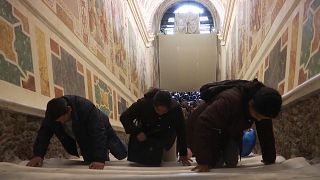 The faithful got on their knees on Thursday to crawl up newly-unveiled marble steps, also known as Scala Sancta, at the Vatican.

The deeply-worn Holy Stairs were brought to light for the first time in 300 years after a seven-year-long restoration.

The stairs had been previously protected by a wooden covering.

According to Catholic tradition, Jesus Christ is believed to have stepped on the Holy Stairs before the crucifixion.

Climbing the stairs gives a plenary indulgence, according to the Vatican laws.