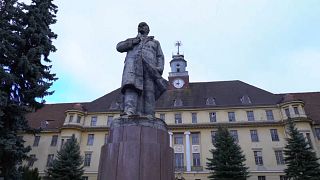 A huge abandoned secret military complex hidden inside a fenced-off pine forest in eastern Germany is no longer off limits.

Tourists can now visit the so-called forbidden city where once the Kaiser, Hitler and the Soviets were militarily active.

It's here that Werner Borchert, the head of the Bücher-und Bunkerstadt Wunsdorf, runs organised tours through the compound in the Wuensdorf neighbourhood of Zossen, some 40 kilometres (25 miles) south of Berlin.

Borcherts, who grew up in the area, leads you through the "Haus der Offiziere," which was built in 1910.