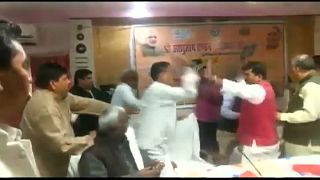 Indian politicians get off on wrong foot in "shoe brawl"

Two lawmakers from India's ruling party were set to be disciplined on Thursday (March 7) after a fight using a shoe as a weapon went viral on social media.

The incident on Wednesday (March 6) has caused embarrassment to the ruling Bharatiya Janata Party(BJP) led by Prime Minister Narendra Modi in a country where shoes are considered unclean and using one as a weapon is seen as especially offensive.

Footage of the altercation in the northern state of Uttar Pradesh, dubbed the "shoe brawl" by Indian media, shows MP Sharad Tripathi beating state assembly member Rakesh Singh Baghel with his slipper after an argument over the placement of names on a foundation stone for a new project.