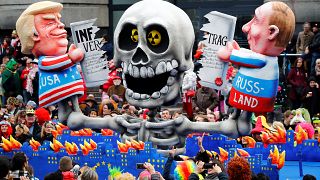 Revellers braved rain and wind to celebrate Rose Monday in the German carnival strongholds of Cologne and Duesseldorf on Monday, using comedy to shine a light on political issues that have dominated the news over the last year.

Cologne is one of the major centres of the German carnival season as well as Mainz and Duesseldorf. Rose Monday (Rosen Montag) is the highlight of the 'silly season' and the parades will be watched by more than one million people.

The carnival was nearly cancelled due to storms and strong winds.

Crowds lined the streets in Cologne to see the themed floats in the parade which featured the usual suspects, including Trump and Italy's Salvini.