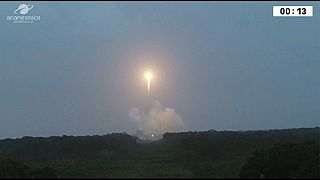 A rocket carrying six satellites took off from French Guiana on Wednesday.

It's the first step in a project aimed at giving millions of people in remote areas of the world access to high speed internet.

The project is the brainchild of Airbus SE and One Web.

OneWeb is part-financed by the Virgin Group's Virgin Galactic.

Richard Branson, founder of the Virgin Group, was present at the launch.

"I was very lucky to be here today and it was a magnificent launch. And obviously, like four or five days ago when we put three people into space, you cross everything that all is going to go well.

And today, we are putting six satellites into space with OneWeb. And it's very important, it's to be part of a constellation ultimately of over 2,000 satellites.

So when they successfully reached space, and they had broken away from the rocket and were climbing, there was a big celebration here."