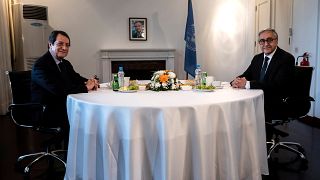 Leaders of the Greek and Turkish Cypriot communities have met to discuss the resumption of peace talks.

The two leaders agreed on confidence-building measures for telecommunications and electricity. However, despite the positive atmosphere, fundamental differences remain.

"The issue here is the insistence on certain positions,” said Anastasiades.

“We've already said that security cannot be ignored. This includes guarantees, invasion rights and the presence of Turkish troops. I have raised issues concerning certain actions of the occupying regime, which negatively affect the atmosphere in general."

In a goodwill gesture, Akinci has decided that paintings of Greek artists, which remained in the Turkish Cypriot side since 1974, will be returned to their owners.

_Get the full story from Euronews' Good Morning Europe by clicking on the player above. _