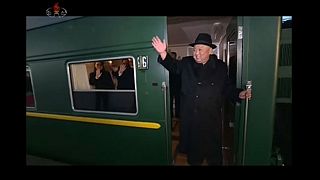 Trump and Kim head to Hanoi ahead of historic summit

North Korean leader Kim-Jong Un has departed for Vietnam for the next round of historic talks with US President Donald Trump.

Leaving from Pyongyang, Kim boarded his armoured train for the 60-hour journey to Hanoi.

The 2nd summit comes as US officials cast doubt on whether North Korea has made sufficient changes on denuclearisation.

President Trump, who jets off today, tweeted over the weekend that he is hopeful for the continuation of the progress made since their last summit.

The White House has been hesitant to sign off on a full peace treaty with North Korea before they have completed denuclearisation. However, it seems as though Washington officials could be preparing a limited version of the treaty in order to signify their readiness for better relations with Pyongyang.

However, it remains unclear whether President Trump actually expects movement from the summit this week. Over the weekend, in a video exclusively obtained by Euronews’ partners NBC, the US President gave a less optimistic prediction of the meeting: "We have a terrific relationship – and we’ll see where it goes, who knows where it goes but we’ll see”.

Pyongyang is keen for the economic sanctions imposed by the United States and the United Nations to come to the end – having publicly called for their cessation.

But across the region there are signs the political and economic pressure on North Korea has sprung leaks as Pyongyang adapts to restrictions and more countries signal their willingness to reopen trade.

Fraying sanctions enforcement prompted U.S. Senators Ted Cruz and Robert Menendez to write a letter to Secretary of State Mike Pompeo this month expressing “deep concern” that efforts by the United States and South Korea to engage with North Korea may lead to sanctions violations.

All this means Trump may have less leverage than he thinks going into this summit.