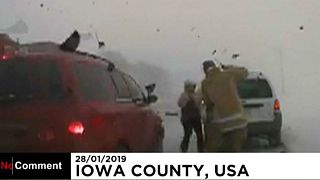 A sheriff's deputy in Dallas County, Iowa, was knocked to the ground by a speeding car on January 28 while attending the scene of a traffic accident.

Footage released by the Sheriff's Office shows a car speeding to overtake a fire truck, slipping slightly due to the snowy conditions and knock an officer to the ground.

Two other people narrowly avoided being hit by the car.

The Sheriff's office said the officer sustained "minor injuries" but that it could have been "a whole lot worse."