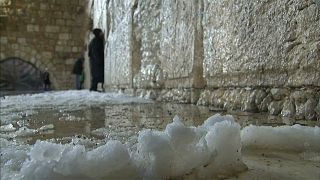 Snow fell over the city of Jerusalem on Wednesday while torrential rains and stormy seas hit Gaza city.

Weather forecasts expected the snow to last until the middle of the night, as an intense but relatively short storm hit the region.

Local media reported that schools would be closed early due to the conditions, while bulldozers have been drafted in to help clear roads.

Temperatures are expected to rise on Thursday (January 17) as the storm moves away.