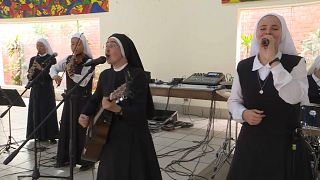 With millions of YouTube views and hits on Spotify and iTunes, a group of young nun rockers play one of their biggest gigs next week, and thousands of Catholics, including the pope himself, will be there to watch.

It may be rock and roll, but Twisted Sister they ain't, and sex and drugs are not an option for the Sisters of the Servants of the Plan of God. They play their brand of melodic rock in their traditional habits.

Known as "Siervas" or Servants, the band plays catchy Christian songs that sound indistinguishable from many of their peers in mainstream rock.

But their appearance is very different, rock's grunge and glad rags giving way to the nuns' tried and trusted black and white habits and veils on stage.