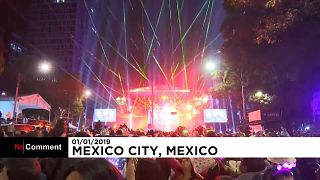 New Year revellers wowed by lasers instead of fireworks

Thousands of people gathered in Mexico City to celebrate the New Year without the city's traditional fireworks display.

Instead, revellers gathered on the city's Reforma Avenue for a live concert and light show, which was held between the stock market and the Monument to Independence.

City authorities decided to replace the usual fireworks with a laser show for environmental reasons.

Real fireworks, they said, would worsen the Mexican capital's air pollution under the weather conditions predicted for New Year's Eve.

Many people said they missed the fireworks but still enjoyed the celebrations.