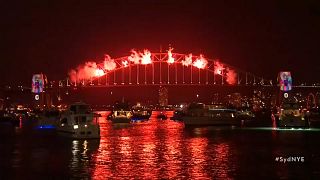 Sydney ushered in the 2019 New Year on Tuesday, with more than a million people lining the world famous harbour to watch the biggest fireworks display the city had ever seen.

Thunderstorms earlier in the evening did not dampen spirits as more than 100,000 individual pyrotechnic effects illuminated Sydney's skies, with this new year's display also featuring a gold, silver and purple tribute to the late Queen of Soul, Aretha Franklin.

According to organisers, the 12-minute display used eight and a half tonnes of fireworks — 500 kilograms more than last year.

The Sydney Harbour Bridge was the focal point for the fireworks show, with an extra 1,000 firework effects exploding off the coathanger, while heart-shaped pyrotechnics lit up the harbour for the first time, Sydney fireworks director Forch Foti said.