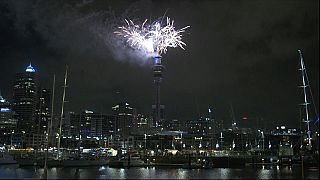 Fireworks lit up the skies over Auckland as New Zealand became one of the first countries to welcome the New Year on Tuesday.

As the clock struck midnight, colourful fireworks burst from the top of the Auckland Sky Tower.

The display was accompanied for the first time by a complimentary light show on Auckland Harbour Bridge.