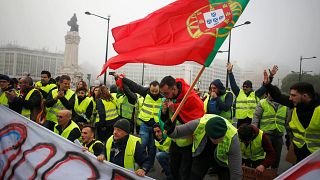 In Portugal 20,000 police officers are on alert on Friday with demonstrations expected across the country.

Mirroring France's worse mass protests in 50 years - organisers have called for “Coletes Amarelos” or "Yellow Vest" rallies of their own and blockades of motorways.

Working under the slogan “Vamos Parar Portugal” – which roughly translates as Let’s Bring Portugal to a Halt – sporadic event pages on Facebook have appeared and disappeared, some with thousands stating they would attend.

Some disruption to traffic was reported on the outskirts of big cities as various groups responded to calls on social media to "block Portugal".

The situation however, is not like France – where President Macron’s popularity is waning. In Portugal, polling shows that over 70 percent of the electorate are supportive of the government. Portugal’s economy has been making steady growth for the past three years and unemployment has fallen.

Antonio Costa who faces re-election next year has put an end to state salary cuts introduced by the previous government as well as raising taxes on goods and services rather than on incomes.