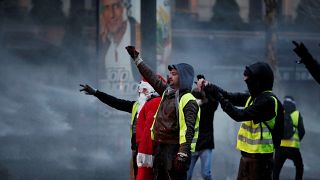 Security guards ejected two independent lawmakers from Hungary's state television building after they tried to read out a petition on Monday (December 17), a day after police used tear gas against pro-democracy protesters in Budapest.

Videos uploaded to Bernadett Szel's social media account showed her fellow MP Akos Hadhazy tussling with security guards after they were thrown out of the building.

The video was shot by activist Timar Csaba.

The two lawmakers were among about a dozen members of parliament who spent the night in the state television building, in a continuation of their demonstration against the policies of Hungary's right-wing Prime Minister Viktor Orban.

The petition reiterated the demands of Sunday's protesters, which included a call for the withdrawal of a new labour law, for independent public media and courts and for Hungary to join the European Union's prosecutors office.