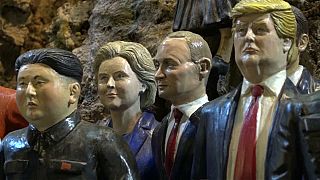 Nativity figures of global politicians and celebrities are flying off the shelves in Naples, Italy.

Traditionally, Christmas nativity scenes are made up of biblical figures. They developed into an art form in the Baroque period and many Italian families display a scene in their homes over the Christmas period.

Cristiano Ronaldo, the new soccer star for Italian team Juventus is reportedly the most popular figure. There is even a life-size version if anyone has enough space.