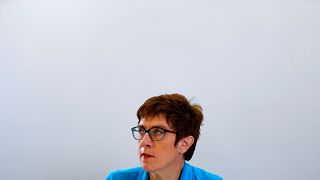 Who is Annegret Kramp-Karrenbauer? Could she be the new Merkel?

Annegret Kramp-Karrenbauer is one vote away from reaching the top of German politics.

She is one of the favourites to take over as the leader of the Christian Democratic Union, putting her on track to become the next chancellor when Angela Merkel retires.

So what kind of politician is AKK - as she is often called?

“Kramp-Karrenbauer is a very grounded politician. She is also a politician that can use both the brain and the heart and she comes across as very warm. But when it comes to making decisions and taking positions, then she is very determined and she does not mess around.” Kirsten Dunz, author of book about Kramp-Karrenbauer said.

Kramp-Karrenbauer started her political career in her hometown of Püttlingen, before becoming the state governor and then taking up the general secretary position of the CDU.

She is the preferred candidate to take over as the CDU leader - sometimes even dismissed as a mini-Merkel.

However, she is far from being always politically aligned with the chancellor, and one reason for that might be her background in Püttlingen.

“She comes from a Catholic, working-class background in the mining areas of Püttlingen. And she is conservative in social questions such as migration, abortion integration, same-sex marriage." Daniel Kirch, political correspondent at Saarbrücker Zeitung said.

"But she sometimes takes very liberal positions for example when it comes to women’s rights.”

The CDU delegates at the party conference in Hamburg will hold a vote on Friday.