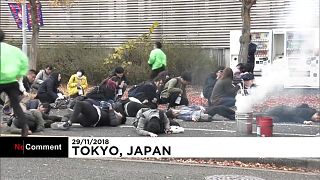 Around 500 people, including police and firefighters, took part in anti-terrorism drills at the 2020 Tokyo Olympics and Paralympics soccer and rugby venue on Thursday.

One drill was based on a scenario involving a terrorist bomb attack. Officers practiced evacuating people from the arena. A police dog jumped on and subdued a person acting as a terrorist trying to enter the stadium with a gun.

In another drill, police practiced handling objects that could contain explosives. Officers wearing protective clothing used a tool to pick up an object from a distance. Tokyo's government plans to study the results of the drills to reconsider how to prepare for terrorist attacks.