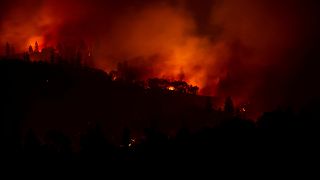 California fires and Brexit protests: No Comment of the week

Firefighters battled to tackle blazes in the state, which has been facing the most lethal wildfire storm since records began.

Sirens sounded in the Israeli city of Ashkelon on Tuesday, warning of incoming rockets. It came amid the fiercest rocket salvos and airstrikes between Israel and Palestinian militants since the 2014 war, Reuters reports.

In Chico, California, wildfire evacuees stayed in makeshift camps on Wednesday, as volunteers handed out food and clothes. Some had signs looking for loved ones who were missing in the blazes.

Pro-European Union protesters were seen near the Houses of Parliament in London on Thursday, as politicians debated May’s draft Brexit deal.

Some carried EU flags, and signs with slogans including: “Brexit: is it worth it?”.