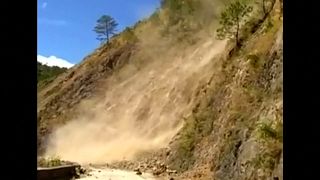 A woman trapped in a bus filmed falling rocks and trees being uprooted by a landslide on Sunday in Benguet, a remote mountainous region on the Philippines' Luzon island.

Kersee Masillem was sitting on a bus that was unable to reverse as another vehicle was blocking the road behind it when the landslide occurred.

Her video shows soil and rocks slip down a hillside before a huge landslide, which uprooted treets and filled the nearby road with debris.

Rocks can be heard bouncing off the bus and passengers screaming inside. No one is believed to have been injured.

The landslide took place at Man-asok near Buguias in the Benguet province, an area prone to landslides.

More than 60 people were killed in the province by landslides triggered by Typhoon Mangkhut in September.