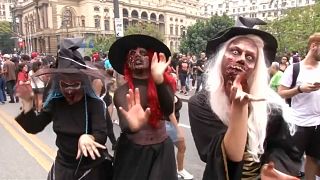 Zombies stagger through streets of Sao Paulo in annual parade

Hundreds of zombies staggered through the streets of Sao Paulo, Brazil on Friday for the city’s annual zombie walk.

The parade of the walking dead was first held in the city in 2007 and has grown in popularity each year.

Similar events are held in cities around the world, including New York, Singapore and Frankfurt.