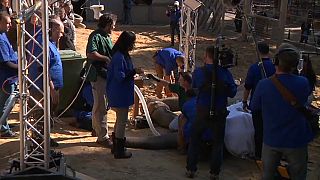 For years Grandi has been struggling with tusk problems. But recently the pain has become much worse for the 21 year-old elephant, with one tusk becoming badly infected.

Both were damaged when he was being transported between zoos as an infant and have been causing him problems ever since.

Grandi had one infected tusk removed in a 2014 operation but due to complications with the anaesthetic, surgeons were unable to remove the other. Four years on, he's about to face the same operation.

Soon after the operation, Grandi was slowly able to get back on his feet, though still a little groggy. The surgeons and zoo staff say he has bounced back remarkably well.