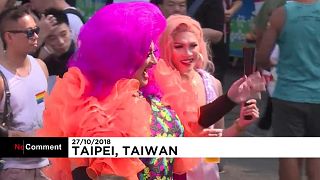 Tens of thousands of people gathered in Taiwan’s capital on Saturday for the annual gay pride parade, weeks ahead of a referendum that is set to decide whether same-sex marriages will be recognised on the island.

Participants wore fancy dress and waved multi coloured balloons and signs in the air in what was dubbed the biggest annual gay pride march in Asia.

Many people travelled from abroad for the event, to show support for LGBT rights ahead of next month’s referendum.

The vote on November 24 will determine whether Taiwan’s legislation is going to modify local laws to make same-sex marriage legal.

It comes after Taiwan’s Constitutional Court ruled in favor of same-sex marriage in May 2017, punctuating a years-long campaign by gay rights advocates.